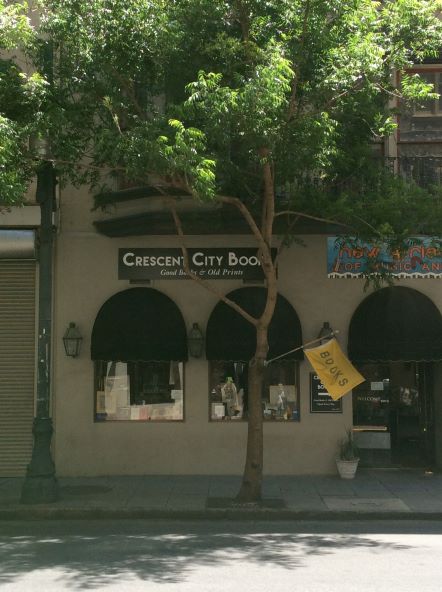 “That book smell comes from this.”

The cashier at the used bookstore I had entered on my quest to find the location of the Double Dealer magazine that had been the first to publish Hemingway’s fiction was behind me. But I knew he was responding to a women’s comment that she loved “the book smell” in the store. He must have been referring to the copy of John Kennedy Toole’s A Confederacy of Dunces she was buying, because the next thing he said was, “Mass market paperbacks.”

“You know the better-quality books?” he said, after a pause. “They make them with acid free paper. The book smell comes from these books. The acid eats the paper. You can smell the paper coming apart, the smell of the wood.”

I was standing in New Orleans’s Crescent City Books, and this reference to wood pulp reminded me that we owe these truly good things in our lives to trees. I had found my way here while wandering the street in search of what remained of Double Dealer’s offices at 204 Baronne Street, and discovered the address had vanished. It appeared now to be buried within a large edifice that holds apartments. Just down the street, though, was a kind of spiritual successor: this used bookstore at 124 Baronne Street.

I ended up picking out two books for myself: one a picture book on the Irish locations that had inspired James Joyce’s Ulysses, and the other a beautiful facsimile of the first edition of F. Scott Fitzgerald’s This Side of Paradise. Both books were appropriate to my Hemingway quest since, in the Paris of the 1920s, Hemingway had become friends with both authors.

As I made my purchases, I told the young man behind the cash register that I had come down Baronne Street to try to find the original location of Double Dealer. I thought I might have to say more but he was familiar with the magazine and excitedly jumped right into talking about it.

“They started that because people didn’t believe New Orleans had any literary culture. But it was very active.”

“They just needed a place to get it out,” I interjected.

He nodded. “They just needed a place to get it out.”

He was checking the back of one of the books I had picked out to find the price, but kept talking.

“It was a community of people and there was a lot of emphasis on the older writers passing on what they knew to the younger writers. Like Sherwood Anderson, that’s what he was doing.”

“It’s a boutique now. Dresses and stuff. But there’s a plaque marking where it was. He was so important for Hemingway and Faulkner at a key moment in their careers.”

“Yes!” I said excitedly. “They were writing poetry.”

“Told them to be storytellers.”

“Yes,” I agreed. “To be storytellers like himself. And then look what happened, they both turned on him. They both wrote satires of his work. Hemingway wrote The Torrents of Spring to make fun of him, to make fun of Dark Laughter.”

“And Faulkner with Sherwood Anderson and other Famous Creoles. There was a huge break with them. He wouldn’t speak to them.”

“Yes,” I said again. “I find that all very depressing, the way they both turned on Anderson after he had helped them so much. You can’t blame him for not wanting to talk to them.”

“You can see the difference in their two personalities afterward. Hemingway was like, ‘you don’t want to talk to me, fine, who cares,’ but Faulkner was more like, ‘I’m so sorry, I’m so sorry.”

“Faulkner wrote nice things about Anderson later,” I said. “After he died.”

We were silent for a moment.

As he put my books in a bag, he returned to the topic of the Double Dealer. “Did you know they had a bookstore in the building? Along with a print shop?” He told me he had a lot of respect for the Double Dealer’s poetry editor. “He wrote stuff that we would consider ahead of its time. A bit old-fashioned, with rhyme, etc. But it has an edge. He had taste.”

How to cite this blog in MLA 8:

Wyoming and Montana Conference Preview - Recording
In just over a month, many of us will meet out west for the...

In Memory of H. R "Stoney" Stoneback
The Ernest Hemingway Society is deeply saddened by the death of...