Teaching Spotlight: "To Hell with Hemingway" 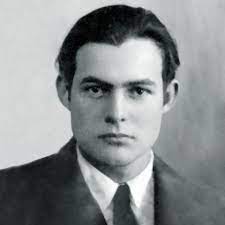 In a survey of fiction class I just finished teaching this spring, there's a line in a book that I taught, Carmen Maria Machado's memoir of queer domestic abuse, In The Dream House.  There's a scene of high-school bonding Carmen is describing with a friend/possible girl-crush, in which they are developing their personal literary touchstones, and one of the ways they develop their literary hipster bona-fides is saying to each other, "To Hell With Hemingway!"

This captures, for me at least, one of the most interesting and frustrating aspects of teaching Hemingway.  Many students have heard of Hemingway, but frequently haven't read much of him.  What many are vaguely aware of is that the Hemingway brand represents mainstream/canonical/traditionalist/cis-gendered-white-heteronormative-maleness.

In this particular survey of fiction class, I taught several Hemingway stories: minimalist plot structure in “Hills Like White Elephants,” the famous iceberg theory in “Soldier’s Home” and “Big Two-Hearted River.”  But it always feels like I'm always fighting an uphill battle trying to convince students how avant-garde and experimental and influential Hemingway's writing is.

“Hemingway sucks. I don’t get it.”  Those words were said to me by a certain extra-precocious student named Colin.  Colin was the type of student who slammed the classics, the type of student who always had perfectly coiffed hair, the type of student who wore tucked-in Depeche Mode Violator t-shirts (I’m not sure whether he wore this shirt ironically or sincerely).  “I hate Fitzgerald.  I can’t believe I’ve been forced to read Gatsby three times.”  “Poe is boring!”  “George Saunders sucks!”  Colin was incredibly smart and well-read, very aware of his own intelligence, and was never shy to unleash his opinions at a moment’s notice.  He was the type of student who on the first day of class, as you’re going over the syllabus, might announce to the entire class that he hates one particular novel that you were planning to teach. Colin had taken your classes previously, and you had grown fond of him, but he put you on the defensive.  Yet still you fight.  You defend Poe, you defend Saunders, you defend Hemingway.  We have to understand how radical Hemingway’s fictional choices were, how revolutionary his writing style was for the time, you pleaded.  Colin looked nonplussed.

On the last day of class, I gave Colin a kind of a "mock" gift of Hemingway's The Sun Also Rises.  He scoffed and laughed, and before I knew it we were fiercely debating Hemingway's merits.  As I explained to him what the novel was about – liberated sexually empowered female (anti-)hero character who tortures every male character in the novel; male “hero” who literally doesn’t have his _______ due to war trauma – Colin looked more and more fascinated.  I told him, “If you just read this novel without realizing it was written by Hemingway, you would love it.”  He looked intrigued.  But he still couldn’t get past the Hemingway of it all.  At the end of the conversation, though, Colin did say, looking at the book jacket, "This copy doesn't have that photo of the young Hemingway that's on the other books.  That photo is hot."

The unexpectedness of Colin's comment disarmed me.  My mouth broke out in a big smile.  I realized I had a way in.  As a vocal member of the LGBTQ+ community, Colin and many other students in my class were hungry for any work of literature that celebrated more inclusive representations of gender identity and expression.  If Colin was open to reading The Sun Also Rises, perhaps the more radical gender play in "The Sea Change" or The Garden of Eden might be next.  Perhaps, then, the dominant image of Hemingway for a new generation of students might no longer be the hyper-macho, elder-statesman "papa" but a more youthful, more vulnerable, more playful vision of a "hot" Hemingway.

How to cite this blog in MLA 8:

Wyoming and Montana Conference Preview - Recording
In just over a month, many of us will meet out west for the...

In Memory of H. R "Stoney" Stoneback
The Ernest Hemingway Society is deeply saddened by the death of...